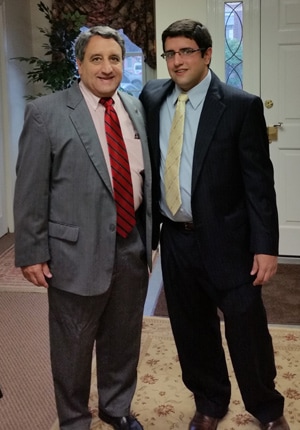 James G. Noucas, Jr. and James C. Noucas
James G. Noucas Jr.
When Jim began practicing law in 1979, he became involved in the asbestos litigation representing federal employees from the Portsmouth Naval Shipyard. This led to the representation of federal employees in a variety of employment-related matters. While his practice started with the employees of Portsmouth Naval Shipyard, over the years it has expanded to involve a wide variety of federal agencies including the Department of the Navy, Department of the Army, United States Postal Service, Department of Agriculture, National Passport Center, Internal Revenue Service (IRS), U.S. Marshals, Federal Bureau of Prisons and many more. Jim has represented federal employees before the Office of Workers’ Compensation Programs (OWCP), the Employees Compensation Appeals Board (ECAB), the Merit Systems Protection Board (MSPB), the Equal Employment Opportunity Commission (EEOC) and in Federal Court.

Over time, Jim expanded his practice to include more areas that resemble a typical “general practice.” These areas include Personal Injury, General Business representation, Civil Litigation, Estate Planning, Probate, Real Estate and general employment law representing workers from New Hampshire and Maine. It’s his firm belief that he can help any client that walks in the door and he wants to be their lawyer for life. Jim established the Noucas Law Office in 1992.

Jim earned his B.A. from Dartmouth College in 1974 and his J.D. from Boston College in 1979. He is admitted to practice in the State and Federal Courts of New Hampshire and Maine, the First Circuit Court of Appeals, and the Court of Appeals for the Federal Circuit. Jim has twice been named Citizen of the Year in Portsmouth and was the recipient of the 2012 Vickie M. Bunnell Award from the New Hampshire Bar Association for outstanding community service. In his spare time, Jim is co-chair of Portsmouth Listens, a community dialogue group that assists the City of Portsmouth by providing dialogue and feedback from citizens on a variety of community issues.

Contact: jnoucas@noucaslaw.com
James C. Noucas
Jim joined Noucas Law Office in 2014. Jim has followed in his father’s footsteps practicing in the areas of Personal Injury, General Business law, Civil Litigation and Employment Law. He also assists his father in the federal employment section of their practice. On the federal employee benefits side, Jim works on federal workers’ compensation cases and disability retirement cases and assists his father with employee discipline cases in front of the Merit Systems Protection Board. Jim takes pride in finding creative solutions to clients’ problems.

Jim earned his Bachelor’s in Political Science from Boston College in 2009 and his J.D. from University of New Hampshire School of Law in 2014. Jim is admitted to practice in the State and Federal Courts of New Hampshire.
Contact: jimnoucas@noucaslaw.com

Terri L. Kirby
Office Manager and Legal Assistant
Terri graduated from McIntosh College in 1979 from a program that has produced the finest legal secretaries in the Seacoast. Terri has been working with Jim since September 9, 1979 and is the only secretary Jim has ever had. Terri evolved into the Office Manager in 1992 and is the firm’s probate and real estate paralegal. She keeps it all working.
Contact: tkirby@noucaslaw.com

Judith Coupal
Paralegal
Judy graduated from the Burdett School in Boston in 1981(Legal Secretarial Degree) and McIntosh College in 1983 (Paralegal Degree). She has been a paralegal in the Seacoast for over 30 years. She joined Noucas Law Office in 2004. Judy is the firm’s “go to” paralegal for personal injury and federal worker issues. She is the most knowledgeable paralegal in the Northeast concerning federal workers’ compensation matters.
Contact: jcoupal@noucaslaw.com